Not Your Typical Halloween Costume: TrashMe

Rob Greenfield decided to go on an epic adventure in New York City, which definitely won't help him get lost in the crowd.  For 30 days (Starting Sept. 19th, 2016), Rob decided to take on every piece of trash he was offered, he encountered, he created, or was tied to something he consumed.  Given that the average American creates 4.5 pounds of trash per day, this could get heavy! 135 pounds in fact, mathematically!  That amount of weight would make everyone think twice about consumption and diet!


Now granted, Rob isn't your typical New Yorker, nor is he your typical run-of-the-mill guy, as a matter of fact. He's a self proclaimed "adventurer, environmental activist, humanitarian, and dude making a difference."  He created "The Food Waste Fiasco" campaign to bring awareness to food & hunger. While on that brigade, he was known to dive in a dumpster or two to showcase the usable food that's going to waste. He's biked across America twice to raise awareness towards living sustainability. He's significantly limited himself to just over 100 possessions to show frugal living is a happier lifestyle than having all the "stuff."  He's done a number of TED talks and written the book "Dude Making a Difference." Doing dramatic things like wearing a month's worth of trash is exactly the kind of thing that Rob likes to do to highlight our regular actions that we all take for granted.

In 2018, Rob's suit-o'trash will be on display at the busiest US airport: the Atlanta International Airport.

To learn more about Rob Greenfield's adventures, check out his webpage.  While you are doing so, ask yourself: "What big and small differences can I make now."  While you are there, contemplating the changes you can make, ask yourself "WWRD: What would Rob do?"  You don't need to go quite to those extremes, but imagine how our mindset would change if we saw Rob (or some neighborhood kids) walking door to door this Halloween in this attire.  It might make us change our minds indeed! 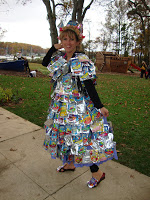 Reminds me of a Halloween costume I once had. But only for a day!