One of the gentlemen was John Joel Burton (referred to by my friend as "Uncle Jack"). John Burton had a full life of adventures as a chemical engineer and a traveler of the world. Tales hold true too that "Uncle Jack" could also play a mean game of backgammon.

A voracious lifelong learner, he also loved writing and sharing his ideas. At 99 years old, having previously lost an eye in a chemical project, John Burton had an ability to see with a greater clarity of vision than many either half his age or blessed with both eyes.  According to my friend: "Uncle Jack was a fighter for the environment.  As he grew older, he became more dedicated in his fight to raise awareness of how we were hurting our natural resources.  He wrote innumerable letters-to-the-editors in many newspapers and magazines.  He had many op-ed pieces published.  He had essays about an assortment of topics. Many were about the perils of global warming and population stress on the globe."

To see many of John Joel Burton's writings, visit his website to read his thoughts on these topics:

One of the most fascinating things I noticed was that many of his texts were written in the early to mid-2000s.  Ten years later, the topics are still current, and unfortunately (when it comes to the "debate" about climate change) still surprisingly questioned.  As I previously stated: John Joel Burton had more vision than most.  Here are some pretty powerful quotes that were a decade ahead of where many still are today.

"We are the leading nation in the amount of greenhouse gases already added to the atmosphere and in the amount we are adding at present. And as the wealthiest nation we can best afford to undertake preventive actions. Is it a coincidence that the U.S., with the most unregulated free market economic system of all nations, is also the nation most opposed to taking action to prevent global warming?" ~ John Joel Burton 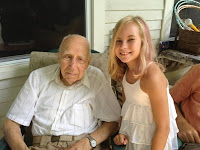 "To put it simply, our culture lacks a global perspective, an understanding and compassion for the economically or socially disadvantaged, an awareness and concern for the future and a willingness to sacrifice some aspects of our lifestyles for the common good. We have a flawed definition of a successful life in which 'success' is seen as the amount of power, prestige or wealth an individual has acquired.

"I am strongly against overconsumptionism--consumption of things we doesn't really need but that are seen as essentials by our culture and the power of advertising. It is most likely that the people of the wealthy nations are going to suffer from global warming, and exhaustion of global resources, starting with shortage of water. We need a culture that does not glorify wealth and high living but instead glorifies individual merit." ~ John Joel Burton


Good thinkers and champions of the environment will always be missed. Cheers to you, Mr. Burton, your 99 years, and all that you did with them.


Pictures from my friend, Heather Burton Boughey of her "Uncle Jack."
Posted by Vicki at 11:00 AM