You can rarely score better than 100% on a test. People say when you give something 110%, you're giving it "your all." 100--110% are remarkably good things! However, 110, when it refers to the heat index that is associated with the 102°F temperatures outdoors, is not that good of a thing after all. 100 is truly not any better. Hot is hot. Bloody hot!! Dangerously hot!

According to The Weather Channel's recorded weather for Baltimore for the last 7 days this July (see graph to the right), we've been living on or near 100°F for the bulk of a week. In fact, in looking at the graph, I beg to differ with Friday's 99°F due to the 3-digit number that my car thermometer reported (not to mention my own personal sweat factor). During yesterday's 104°F, I was attending a wedding (thankfully indoors), and I "sweated" more than I think I have ever sweat before. Yet, the bride and groom merely glistened and glowed... despite the fact that their families had endured 7 days in all of this heat with no electricity due to the Friday, June 29th derecho storm that swiped Maryland, knocking out trees and power left and right. (Plus, now they have a good story to tell their grandchildren about the week prior to their wedding.)

Just 2 days ago, an interesting article appeared as an OpEd piece in Newsday by Joshua Keating entitled "Bad Weather or Global Warming?" In it, he argues just that--when is weather just wacky, and when is it a result of climate change (aka "global warming.")? He writes:

"This is what global warming looks like at the regional or personal level," University of Arizona professor Jonathan Overpeck told The Associated Press of this summer's heat waves, wild fires and brutal storms. The liberal news watchdog Media Matters has blasted outlets that fail to mention climate change in the coverage of the wildfires sweeping across western states. Some commentators have also blamed climate change for the June 29 derecho storm that spread from the Midwest to the East Coast and left 23 dead and 1.4 million without power."

He goes on to say (as I quote from the same article):

"In fact, more than 2,000 U.S. heat records were broken just in the past week. Climatologists argue that while there's certainly nothing unexpected in periodic record-breaking temperatures, the rate at which these records are being broken year after year can't be explained away by coincidence."
"There's a randomness to weather, but what we're seeing is loading of the weather dice to the point where sixes are coming up 10 times more often," says Mann. "If you were gambling and you saw sixes coming up 10 times more often you'd start to notice. We are seeing climate change now in the statistical loading of these dice."

Keating goes on to say that there are still complications from causally connecting one weather event to climate change, but I think his gambling analogy is a good one.  Why?  Gambling is something we all associate with money, and money does indeed seem to be something we all understand.  It is through money that we often feel the biggest impact.  So perhaps some of those climatary punches will start to be felt.

When you add in some greater statistics, I think the climate change argument gets harder and harder to argue and dispel.  According to Science Daily, May 2012 had the second warmest global temperatures on record since we've been keeping track of that data since 1880. (Incidentally, the #1 time was only 2 years ago: May 2010). (For those of you wondering why "May 2012" and not June or July, the statistical analysis for May came out June 18th, meaning it's probably too early in July for full info on June!) If that stat isn't good enough, what about this one:

"May 2012 also marks the 36th consecutive May and 327th consecutive month with a global temperature above the 20th century average." 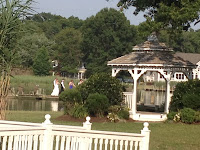 327 months in a row? That's 27.25 years. YEARS!! Years beating the 20th century average. That is significant. That is older than my friends, the bride and groom, at yesterday's wedding
It is through numbers such as these that makes me shake my head, wondering what people are thinking when they vehemently argue against the fact that the planet is heading up at a rapid rate. Numbers such as these are not coincidental!