Here is my written testimony that I prepared for
yesterday's visit to Maryland's Health & Government Operations Committee with Delegate Carter.
House Bill 223: State Government --
Commemorative Days -- Earth Hour Assigned to: Health and Government Operations February 16, 2011
Ladies and gentlemen, thank you for your invitation to testify before you today on the subject of Earth Hour.

My name is Vicki Dabrowka. For the past 4 of my 18 years of teaching, I have taught 3rd grade and served as one of the two “Green Team” leaders for Eagle Cove School in Pasadena, Maryland. Eagle Cove School (previously named Gibson Island Country School) has been a Maryland “Green” School since 2006. Outside of school, I write and maintain an environmental blog entitled “Green Team Gazette.” In it, I share environmental resources with other educators, parents, and eco-minded individuals. I also write a monthly newsletter that is shared on three websites: our Eagle Cove website, CynerGreen.com, and CGKidz.com. It is through our affiliation with the latter two that Eagle Cove School connected with the Alain L. Locke School in Harlem, New York. In 2008 we helped Alain L. Locke start its first environmental club, and we recently partnered together become “Sister Schools.” My children also attend ECS. Needless to say, I take environmentalism rather seriously, both personally and professionally. 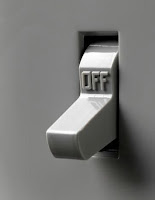 As a Maryland “Green” School, we at Eagle Cove are highly committed to many of the “hot topics” of environmentalism: sustainability, environmental literacy, restoration, energy consumption and conservation, resource management, and more. Of course, to your average 4 to 10 year old student (the PreK to fifth grade population we serve), these terms mean very little. However, our students do understand when you put “these BIG issues” into “their” terms:
· Helping the Earth;
· “Going Green;”
· Reduce, reuse, recycle…even compost;
· Respect all living things;
· Save energy by turning out lights. (One of my classroom jobs, in fact, is “The Illuminator” who’s big job is to “de-illuminate” and turn the lights off.)

These words…and their meaning…the children understand. At ECS, we hold Morning Meetings three times a week with the entire student body to share announcements, birthdays, songs, and presentations on all of the above environmental issues. We often talk about “taking action” and the idea of “accomplishing more when you work as a team.” These two principles are at the heart of Earth Hour, and they speak strongly to both young (and old) children alike.

This year will be our third year of being actively involved with Earth Hour at ECS. As a pre-learning activity during the 2008-2009 Winter, my 3rd grade class monitored the amount of “saved electricity” we did NOT use whenever we could use natural sunlight rather than interior lights. We recorded this on a grid the shape of a light bulb.

In March of 2009, we researched the EarthHour.org website and watched the videos with our “Roots And Shoots” club (an environmental program for students sponsored by the Jane Goodall Institute). The students and I created an Earth Hour invitation in the form of a poem that was later presented to our student body. (This poem is currently on our Eagle Cove Website in our “Past Environmental Activities” section.) Our Earth Hour event was held on the school’s campus under the guidance and organization of both myself and our science teacher, Tim Decker on March 28, 2009 from 8:15 to 9:30 pm…just enough time to get there, get organized, and ceremoniously turn out the lights. Had it been an evening of delightful weather, we would have found ourselves outdoors playing games such as “Ghost in the
Graveyard” by flashlight. As it turned out, the March Maryland weather did not cooperate; however, based on the candlelit revelry indoors, no one seemed to mind.

Plans were to make Earth Hour an annual ECS tradition, yet we found ourselves recovering from a February fire almost 1 year ago today. Given that fact, an on-campus event was impossible due to portable classrooms and a lack of space. However, we again educated our student body with the online videos, discussions, and online activities from the EarthHourKids website. We challenged both our student and adult population to take part in Earth Hour 2010 by turning out the lights together, as a family, a neighborhood, or a community. The following week, students came to share the many ways they “unplugged” that hour: by taking nature walks, roasting marshmallows outdoors, picnicking by moonlight, playing board games by candlelight, and more. In fact, more than one parent reported to me that their children wouldn’t dare let them even think about turning on the lights!

Earth Hour 2011 is upon us and plans are in the works. The initial plans were to return to our on-campus event; however, our head of school Laura Kang, and the two “Green Team” members (Tim Decker and myself) will be returning to Maryland earlier that Saturday morning (March 28th) from visiting Alain L. Locke, our Environmental Sister School, in Harlem, New York. In lieu of an on-campus event (and namely the event coordinators), we will again be inspiring students to create their own “lights-out, taking action” adventures, and urging them to report about it during a special Morning Meeting the Monday following Earth Hour.

It is our job as educators to instill in our students--our children--many strong characteristics. Through the lens of environmentalism at Eagle Cove School, we are able to address all of these: respect, responsibility, critical thinking skills, the ability to solve problems proactively, character skills such as empathy and compassion, and the importance of acting as stewards to care for our Earth.

Earth Hour too does that same thing. It nods its head at the understanding that yes, one small act is just that, a small deed. But those deeds can serve as the pebble in the pond, and extend out a vast number of ripples. Additionally, you have the sum of many individual actions acting as a multitude of pebbles. Through that, the difference is most certainly seen and felt. One hour is not going to make a difference in terms of wattage or major savings on anyone’s electric bill. One hour in one house--or even many--is not going to stop climate change. However, it speaks volumes of the desires of people to be a part of something bigger than themselves--to be proactive for the planet. 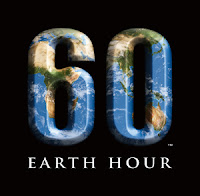 And yes indeed, one little action can make a huge difference. 5 years ago, one small action occurred in a town called Sydney, Australia that chose to take a stand. They chose to unite, turn off their lights, and speak a simple, yet poignant message. Each year, the spirit of the message grew. Last year, a mere 4 years later, over 128 countries took a stand. Last year, the Earth Hour message reached approximately 1.3 billion people. That is nearly 1/5 of our world’s population as it nears 7 billion citizens (slated to occur by the end of 2011). Numbers of this size are often difficult for children to grasp, yet even they can sense the enormity of 1 out of every 5 people on the planet. It is in the exponential growth of a global event such as this that you feel the momentum and magnitude of this “grassroots” message.

Additionally, our students--our future leaders--need to see our emphasis on the importance of such global concerns. They need to be educated and encouraged to participate--as perhaps their parents do as well. Then after Earth Hour, when they see photographs of darkened landmarks that they know (such as the Taj Mahal, the Sydney Opera House, and the Eiffel Tower)—especially if they were a part of Earth Hour--they will feel the significance of Earth Hour’s message: “If you can do this, imagine what else you can achieve.” Such a powerful message of hope, inspiration, and community is meaningful when the nightly news isn’t always so inspired. People enjoy feeling empowered. Earth Hour is a simple way to spread education, information, and optimism. Given that, my question to you is why would you NOT want to participate in this global event and inspire people to be a part of something bigger than themselves?

The Maryland Government should be part of that message and should vote to be a part of Earth Hour. As Chief Seattle said over 150 years ago, “We do not inherit the earth from our ancestors; we borrow it from our children.” Maryland’s Government needs to pass this legislation in order to return this gift to our children, our future leaders of both our state and our nation. For if we do not, and we are not part of the solution, then we are part of the problem. As an educator of our youth, I feel as though that is not an option. I hope you, as our political leaders, feel the same.