Eco-Songs: We've Been Workin' on the River 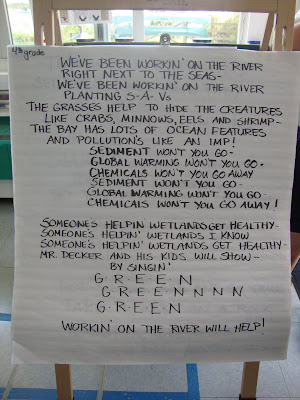 Here is the song that Linda Richards sang & wrote during Eagle Cove's Bay Week finale performance last Friday with the fourth graders (If you've been here before and been paying attention, you know that Linda Richards, of NY & environmental assembly fame, made her way to Pasadena, MD for two days to work some musical, ecological magic with the Eagle Cove students. Our grand finale was a great outdoor concert. Now all that's left to do is to write an Ode to Linda Richards!!