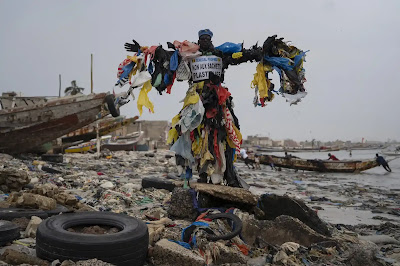 That is what environmental activist Modou Fall is hoping for. And from the look of the foreground and surrounding area, plastic trash and pollution are certainly a problem, as seen here on Yarakh Beach in Dakar, Senegal.

For over a decade, Modou has been traveling around West Africa to spotlight the pollution and environmental problem we are facing... and making sure he's remembered as he goes in his awareness uniform. Having founded the organization "Clean Senegal," Modou educates others on the peril of plastic pollution and its global impact. He goes by the name "Plastic Man." His plastic inspired uniform (which he has repeatedly stated is not a "costume") takes after Kankurang, a Senegalese cultural icon who protects the land, donned in woven grasses, protecting its people from evil spirits. He feels that by teaching others to protect the environment, he  has many of the same roles to the local people.

To read more about Modou, check out this article in the New York Times or see these pictures over at The Guardian.