The Power of Purpose at Patagonia 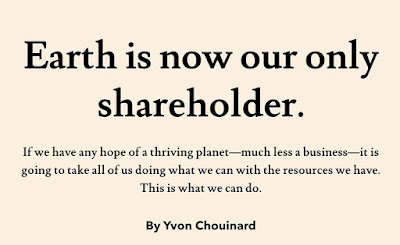 Almost exactly a month ago on September 14th, outdoor-apparel company Patagonia released new of their new, one and only shareholder: Mother Earth.

Yvon Chouinard, founder of Patagonia, has long been donating 1% of Patagonia's profits to environmental causes. Not only previously green in their donations, but Patagonia is known to be green with their other company efforts as well, including their nature-centric vision and emphasis on repairing items. But in September of this year, Chouinard decided 1% was not near enough, and raised the bar another 99%, stating "the Earth is now our only shareholder." All money not going back into the business are profits that will be spend donating to tackle the climate crisis. 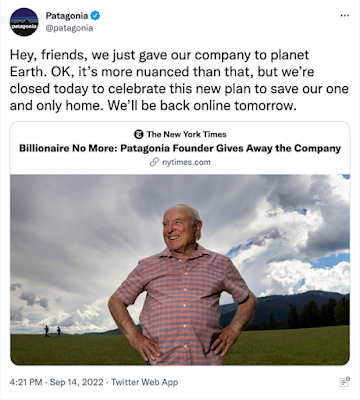 In honor of Patagonia's 50th year since he found it, Chouinard wanted to make a move to make a statement. Not wanting to sell the company in order to donate the money to the environment [and not wanting take the company public], he decided that he'd "go purpose" versus "going public." The company stocks are managed by the following two entities: Patagonia Purpose Trust and Holdfast Collective. The former gains the voting stocks with the plan to protect the company's core values. The latter is the nonprofit fighting against environmental hazards and fighting for nature. The Holdfast Collective also gets the non-voting stock worth $3,000,000,000. 1% will continue to go to grassroots environmental activists, just as before.

It's a bold and innovative way to do business. May more companies continue to follow suit, thinking of a world bigger than themselves and their own personal profits.