When I was reading Katherine Hayhoe's book Saving Us: A Climate Scientist's Case for Hope and Healing in a Divided World, I was struck by her chapter on the "Six Americas of Global Warming." This comes from the Yale Program of Climate Change Communication. Rather than Americans being merely binary as climate believers or climate deniers, there are really six different vantage points. They are pictured here: 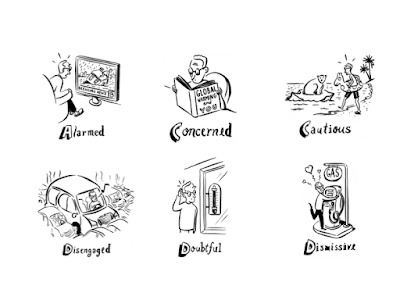 The delineation is as such:
Yale's website has some impressive data visualizations as well as a video detailing each of the six perspectives and how they have changed over time. This infographic from their website shows where the numbers are per category. 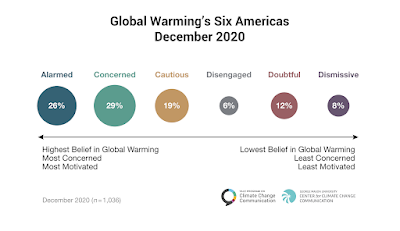 Katherine Hayhoe referenced this information in her conversation about finding common ground to talk with others about climate change. (See my A Trio of Hope Messengers post for more about that.) She said that if you share why climate change is important to you based on what you know about your discussion-mate, you can help them to see why they might want to care. In relation to the Six Americas, you actually have the ability to reach others as long as they are in any of the categories except Dismissive. Dismissives are die hard in their disbelief of climate change. Your stories or experiences, no matter how compelling they are, won't reach them.

I found comfort in this, seeing it as far more promising than I had imagined by news stories of climate deniers. I also see it as encompassing the vantage points in perceived science deniers or even Covid deniers. The principles apply in both of those sets of views too. It's comforting because there are only 8% of the population that is so dogmatic with this issue, viewing climate change in the "hoax" department--meaning, that there's potential to reach the other 92%!

Additionally, it shows a radical shift to the collective concern about climate change. That is what it takes to shift the balance in conversations, legislation, and activism!!