When Father's Day, Civil War, & the Environment All Intersect 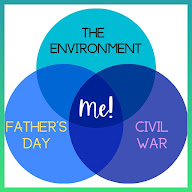 Father's Day, Civil War, and the Environment are not the typical trio. Not by a long shot. Yet it's funny how this year, in my world, they all seem to intersect. I'll admit it, it's a bit of a weird convergence, yet it illustrates my Father's Day 2021.
As part of an extended family adventure, my husband and his dad, both sizable Civil War history buffs, along with a handful of the rest of our family clan, are embarking on a 4-hour historic battle field tour as part of our plans for our Father's Day/Juneteenth weekend. While I'm not the history fanatic the rest of them are, I'm excited that the weather is supposed to be gorgeous this weekend, which will make our outdoor adventure even better!
With the Civil War on my brain as we were gearing up to go, I started googling these 3 terms just to see what it would bring up. Apparently, a lot.

One of the many things I ran across was a book entitled "An Environmental History of the Civil War" by Judkin Browning and Timothy Silver. I never really considered environmental issues under the veil of the topic of the Civil War, but of course, it makes sense. Wars are fought outdoors--especially back in 1861. The land governed how those battles were fought. Civil War battles in the North were named according landforms and bodies of water. [The South typically named the battles based on the nearby town.] The four years of the Civil War brought a direct connection between the natural world and humans given the disease brought about by ailing, weakened soldiers and animals. But from reviews of the book, post-Civil War was also a time which brought about the conservation movement and the beginning of our national park systems.

Another book along the same lines is Kathryn Shively Meier's Nature's Civil War: Common Soldiers and the Environment in 1862 Virginia. Its description places Nature as the common enemy and an equal opponent to both Confederate and Yankee soldiers. "Man versus Nature" has always been a common theme in literature class... and reality!
In fact, if you google "environmentalism and Civil War," you come up with even more articles if you still have a desire to delve deeper online into this connection.

Another interesting find on my pursuit of tie-ins to Civil War and Father's Day led me to this headline on History.com by David Roos fro 2018: "The Man Who Inspired Father’s Day Was a Single Dad and a Civil War Vet." The man in question: William Jackson Smart. William was married and widowed twice in his lifetime. He was the father of 6 from his first marriage and 14 children total after his second marriage and second wife died. A Civil War Veteran, William served as the inspiration to one of his daughters who dedicated herself toward the creation of the first Father's Day.

This daughter--Sonora Smart Dodd--was 16 years old when her mother Ellen (William's first wife) died in childbirth. Years later, Sonora was attending one of the first Mother's Day events at her church in Spokane, Washington in 1909 when it struck her--if we have a day for our moms, why not our dads? In David Roos' article, he has several quotes from Sonora on the dedication she saw her father give her family and siblings. She brought forth her first petition to the Spokane Ministerial Alliance for Father's Day in 1910, wanting Father's Day to be held on June 5th, her father's birthday. Due to timing, they opted for a later date--June 19th. The 3rd Sunday in June. From that first Father's Day in Spokane Washington, Sonora went forward for 60 years (long after her father died in 1919), working towards getting Father's Day to become a national holiday. 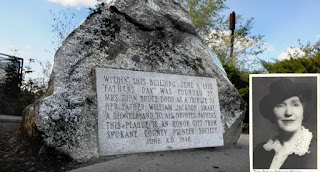 Sonora's dad, William Jackson Smart, was born in Arkansas. Records show he ultimately fought for both the North and the South in the Civil War. Starting as part of the Confederate troops, he was captured in 1862 and opted to join the Union rather than be relegated to a prisoner in a war camp. After the war ended, William ultimately ended up with his family in Washington state. It was here, after her mother died and later William's second wife died, where Sonora saw her father working hard to protect and love his kids as a single father.
Pursuit pays off, but it was a long time in coming. In 1972, President Richard Nixon signed the Congressional resolution placing Fataher's Day on the 3rd Sunday in June. Sonora Smart Dodd, who by this time had achieved success as a poet, artist, children's book author, funeral home director, and civic leader in Spokane, was 90 years old. She died at the age of 96, seeing her lifelong dream come to fruition.
As you approach this Father's Day, may your personal history meet up with you as you celebrate the important fathers in your life. Your day probably won't tie in to the Civil War or entail a battlefield like my Father's Day plans do this year, but maybe some time spent outdoors on a beautiful Sunday may be a great way to celebrate. 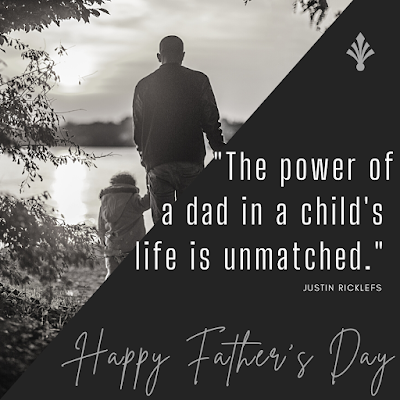 Book images from Amazon.com, quote image from canva.com, and photograph from https://www.tvhs.org/post/father-s-day-the-inspiration-of-sonora-smart-dodd
Posted by Vicki at 1:00 AM