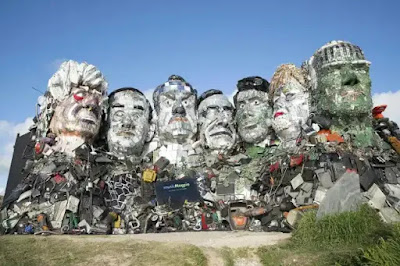 20,000 pieces of electronic waste all in one place is sizable to begin with.
Put those pieces together in an artistic installation--it causes people to take notice.
Put them into the faces of 7 world leaders AND put them on the beach across the Carbis Bay Hotel in St. Ives, Cornwall, United Kingdom where the G7 Summit is taking place--it makes national news.
Welcome to Mount Recyclemore!

Reminds me a bit about Mount Trashmore!
Mount Recyclemore was created by artist Joe Rush & musicMagpie (a second hand electronics store) with the help of 15 artists over the course of 6 weeks. It was first created in Rush's south London studio scrapyard then shipped to Cornwall to be erected in time for last week's G7 Summit. The G7 is the "Group of Seven" organization of leaders from Canada, France, Germany, Italy, Japan, the United Kingdom, and the United States, and the Summit was held during the 3 days of June 11-13, 2021.
The reason behind this creation: to spotlight electronic waste, its harm to the environment, and the need for it to be more easily recyclable and reusable. It is especially true given that some of the worst e-waste heavy hitters being developed nations. E-waste leaches chemicals into the soil or water if sent to landfills, or becomes hazardous air pollution if burned. Both of these are major contributors to environmental destruction and climate change. Additionally, materials in phones, laptops, monitors, and other tech waste include precious materials from limited resources where the extraction process adds major impact to our planet. Especially when e-waste is the fastest growing waste stream right now.
Taking the lead from South Dakota's Mount Rushmore's 4 presidential faces, this structure highlights the following seven leader's faces (in order from left to right):
With climate change and Covid-19 being two of the top issues of the Summit, Mount Trashmore as a creation of discarded tech becomes an important symbol for the environment.
After the Summit's end on Sunday, June 13th, the plan is to move Mount Recyclemore to musicMagpie’s headquarters in Stockport, Greater Manchester.


Image from https://www.motherjones.com/environment/2021/06/g7-leaders-mount-recyclemore-waste-sculpture-cornwall/; video from https://youtu.be/BChR8p51p2k
Posted by Vicki at 1:30 AM