Celebrating 11:11 AM on Veteran's Day 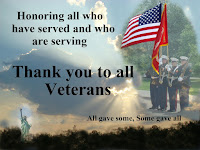 In a way,  Anthem Veterans Memorial in  Anthem Community Park in Anthem, AZ is like that line of attentive soldiers. However, something environmentally magical happens on 11-11 at 11:11 am. That's November 11th: Veterans Day. The placement of the five pillars align in the most perfectly planned way.  It was engineered so that the sun would directly align on a mosaic of the United States' Great Seal through the precision-cut elipses within and throughout the marvelously metallic pillars. Military environmental and engineering magic indeed!

And then there are the bricks. Each paver in the ground has names of men and women who have been in the service. The red if the bricks, the gleaming white if the 5 pillars, and the backdrop of a blue sky further commemorate the day in patriotic color.

To learn about  what when into the memorial and how it was engineered, click here to see an interview with Jim Martin, Chief Engineer.

This is my environmental tribute to Veterans' Day--what's yours?