It really doesn't get much better than this:  It's like the über Reese's Peanut Butter cup where a whole lot of great tastes taste great together!!

Working with GE, Bill Nye (yes, "the Science Guy") has begun a web science series.... with a little help from his Emoji friends. First tackle: holograms. Second tackle:  Climate Change.  (It's real, we can use those words, Florida & Wisconsin & other climate denier states.  Just because you don't want to believe it doesn't mean it goes away!)

This is all a part of the bigger idea that Bill Nye & GE have co-constructed.  #EmojiScience is a 5-part series that will (as Jeff Beer says in his Fast Company article) "hit on topics like energy efficiency, mapping the mind, and materials science, in which recent discoveries show serious potential to impact the world."

Also featured on the EmojiScience website is the "Emoji Table of Experiments."  Might just be what the doctor ordered to spice up your child's summer for those blissful moments of boredom when true creativity & exploration happen! 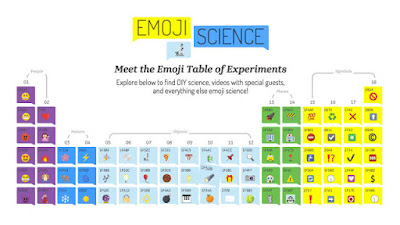 Video from https://www.youtube.com/watch?v=rPqd20tdncg and can also be found at http://emojiscience.com/;
Emoji Periodic Table from
http://www.fastcocreate.com/3039715/ge-drops-some-social-science-with-the-periodic-table-of-emojis
Posted by Vicki at 10:43 AM