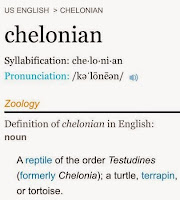 You say "to-may-toe," I say "to-mah-toe."
You say "turtle," I say "chelonian" (which sounds remarkably like "colonian").

I don't, but I could.   Especially on World Turtle Day:  May 23rd annually.

World Turtle Day originally hatched in 2000 by the American Tortoise Rescue (which itself began in 1990).  Given that turtles and tortoises have a number of threats--mostly human instigated--raising awareness is always a good thing.  Threats include: 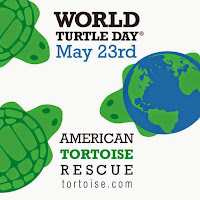 According to NOAA, all seven world species of sea turtles are threatened or endangered.

To enhance your inside information about turtles & tortoises:

1.  Watch this 2 and a half minute video from The Guardian.
2. Read a good turtle book. My favorite? Turtles in My Sandbox, by Jennifer Keats Curtis. You will find some engaging activities to go along with this book from the publisher Sylvan Dell

3. Check out ARKive.org to learn more about animals of any species--especially if you are curious about their conservation status (vulnerable, critical, or endangered). Here with these links, you are a mere click away from creating your own archive of chelonian knowledge at ARKive:

4. For Lesson Plans, World Turtle Day or any other day, check out the following links:
5. Looking for ways to help out our shelled reptilian friends? Huffington Post's "World Turtle Day" article lists some ideas for what you can do to help.


-World Turtle Day Photos from https://www.facebook.com/WorldTurtleDay
-Chelonian definition a screenshot from http://www.oxforddictionaries.com/us/definition/american_english/chelonian
-Video from http://www.theguardian.com/environment/video/2015/may/22/world-turtle-day-barrier-reef-preservation-tourism-queensland-video
Posted by Vicki at 7:00 PM