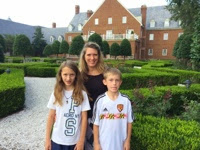 Ahhh....We've been knee-deep in a beach vacation down in Virginia Beach. A hotel with a great indoor pool, plus an outdoor pool (with water slide), gorgeous garden & lake views, and even a hot tub. We didn't even take the opportunity to take advantage of the resident day spa. Between trips to the actual beach (spending the day wave jumping) and nearby Busch Gardens Williamsburg, there was no time. 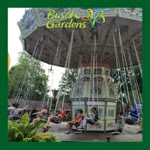 But there was one particular highlight for this eco-blogging girl. Much like Dan Gutman's Coke and Pepsi from his "Genius Files" series, my family (just like Gutman's McDonald's family) got dragged around to see the sights of Mom's weird-but-true landmark whims. The Yoyo Museum? Nope. The National Mustard Museum? Nah... We went to Mount Trashmore. Yep, you heard right--just like it sounds! Apparently one of the most visited parks in the area and the state (with over a million visitors per year). 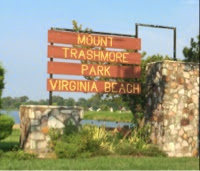 Built in 1974, Mount Trashmore is a public park site built on an abandoned landfill that was properly covered and sealed. The park consists of two mountains, a lake, miles of hiking/biking trails, a fairly snazzy skate park, and two playgrounds. The night we got there, a group of street musicians were playing their rhythmic sounds, and a jazz concert was scheduled shortly before dusk. Kites were flying, both playgrounds were filled, and there were dog walkers, laughing picnickers, swing pushers, jogging climbers, and mountain roller-downers (including my kids). There might even have been some fisherfolk, hanging out by the lake. According to our GPS when we arrived at the park, we were near sea level (elevation-ly speaking)...so the 73-step climb felt impressive, with its mountaintop view (though I'd be more apt to say "hilltop" view) of the buildings of downtown Virginia Beach to one side, and Lake Trashmore on the other. 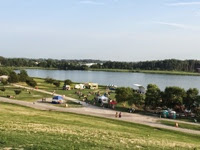 According to the wonderful world of Wikipedia (and we all know how sketchily reliable that can be), there are two other Mount Trashmores out there.  One of which is currently used landfill in Florida, but the other is a similar park site built on a post-existing landfill. It is located in Evanston, Illinois.  It brings to mind those 3 R’s (which I always debate there are more than a mere 3). "Reuse" would sum up what you'd call it, but I like to think of it as "reclaim." They reclaimed the land and made it something new and useful, that positively promotes nature and the outdoors.  The very heart of turning lemons into lemonade!

Post Script:  I got a little creative with my visit to Mount Trashmore.  Click here to see "Marveling at Mount Trashmore:  Part 2" & my video trailer tribute!


Dan Gutman Genius Files pic from http://www.amazon.com/The-Genius-Files-Mission-Unstoppable/dp/0061827665;  all other pics from my camera.
Posted by Vicki at 11:02 AM