The "Frankenstorm" Is Here 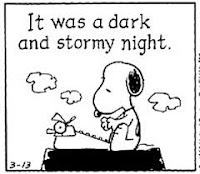 As the winds start whipping up, the "fiercest" of this very rainy, hurricane-y day, here's to squeaking out a quickie post before the power goes down. Seems like the right time for a follow up to yesterday's "I'm Not a Climatologist, but Frankenstorm Sandy's A-Coming" post.


It was a dark and stormy night...

Classic horror tale starter.  Yet, tonight as the rains hammer down, as the winds kick up, as "Frankenstorm Sandy" makes landfall here in the Northeast, it's the perfect description for tonight.  After a day off school, watching the rain come down, laying in wait for the power to go out, hoping the sump pump holds out and the backyard saturation doesn't funnel down the basement cellar door stairs, the pitter patter of the rain is now second nature.

I find it interesting that CNN apparently has banned from their commentary the use of the term "Frankenstorm."  Too scary.  Hearing the storm with it's whipping winds, intensifying here, I feel the looming doom.  I've watched the news a bulk of the day, seeing pictures of Ocean City, MD drowning away, and numerous other sites up and down the coast.  Heck ya, it's scary!

A great article that doubly agrees in the scariness of a not-so-scarily-named Hurricane Sandy, is an article from "Think Progress' Climate Progress" written by Joe Romm. The title isn't short and sweet, but it hits it to a 'T': "CNN Bans Term 'Frankenstorm,' But It's A Good Metaphor for Warming-Driven Monster: 'Largest Hurricane in Atlantic History."

Joe includes some "unprecedented" quotes about this unprecedented storm by some well-knowns from the climate/weather world. My personal favorite quotes are from Joe himself where he agrees with environmental author & educator Bill McKibben that "Frankenstorm" is indeed precisely the right name for Hurricane Sandy.


"Frankenstein — and his monster — have become a metaphor for the unintentional consequences of scientific and technological advances.... The name “Frankenstorm” fits. Ostro says this is “even more extreme” than the infamous Perfect Storm of 1991. The unique severity of the storm is the point! Manmade warming has consequences.... Manmade climate change is one monster we still have some control over. But here’s the final warning. We are already seeing Frankenstorms, and we’ve only warmed about 1.4°F over the past century. We are on track to see more than 5 times that warming this century. The monster storms that would spawn are beyond imagining." ~ Joe Romm

Ouch!  When are we all going to open our eyes and take heed?  In a state that currently has a hurricane warning for this side of the state, and a blizzard warning for Western Maryland, how many floods, forest fires, derecho storms, record snow falls, Frankenstorms, and other massive weather events is it going to take until we take heed??

To all who are in the path of destruction and doom of Frankenstorm Sandy, may safety, security, electricity, and a dry environment be yours, this dark and stormy night.


Snoopy pic from http://tvtropes.org/pmwiki/pmwiki.php/Main/ItWasADarkAndStormyNight; Hurricane Sandy from Grease photo from http://www.hollywoodreporter.com/news/hurricane-sandy-grease-spongebob-squarepants-383988.
Posted by Vicki at 8:45 PM