When Linda Richards was here last week at Eagle Cove School's Bay Week Concert, she sang one of her usuals, and one of my perinnial favorites that she sings each year:  "Garbage, Garbage, Garbage." 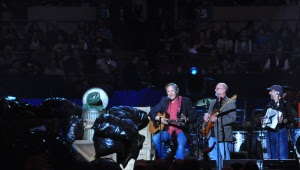 Below, the song is performed with a little help from the perfect helper:  Oscar the Grouch. 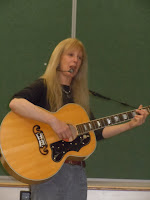 Interestingly in the video, it is during the Clearwater Concert to celebrate Pete Seeger's 90th birthday.  Pete Seeger adapted the 1969 Bill Steele version of the song by adding the 4th verse.  In a "1 degree of separation," Linda Richards has spent many years in the past as Pete Seeger's Chief On-Board-Educator on his "sloop" The Clearwater, a sailing vessel he co-founded in 1969 to use as a way to educate about the pollution in New York's Hudson River.

Mister Thompson calls the waiter, orders steak and baked potato
Then he leaves the bone and gristle and he never eats the skins;
The busboy comes and takes it, with a cough contaminates it
And puts it in a can with coffee grinds and sardine tins;
The truck comes by on Friday and carts it all away;
And a thousand trucks just like it are converging on the Bay, oh,

Mr. Thompson starts his Cadillac and winds it down the freeway track
Leaving friends and neighbors in a hydro-carbon haze;
He's joined by lots of smaller cars all sending gases to the stars.
There they form a seething cloud that hangs for thirty days.
And the sun licks down into it with an ultraviolet tongue.
Till it turns to smog and settles down and ends up in our lungs, oh,

Getting home and taking off his shoes he settles down with the evening news,
While the kids do homework with the TV in one ear
While Superman for the thousandth time sells talking dolls and conquers crime
Dutifully they learn the date of birth of Paul Revere.
In the paper there's a piece about the mayor's middle name,
And he gets it done in time to watch the all-star bingo game, oh,

In Mister Thompson's factory, they're making plastic Christmas trees
Complete with silver tinsel and a geodesic stand
The plastic's mixed in giant vats from some conglomeration
That's been piped from deep within the earth or strip-mined from the land.
And if you question anything, they say, "Why, don't you see?
It's absolutely needed for the economy," oh,

Oscar the Grouch pic from http://www.jambase.com/Articles/17878/Celebrating-Pete-Seeger-Voice-Of-The-People

Linda Richard pic from my camera when she was here last week during our Bay Week Concert
Posted by Vicki at 11:34 AM