A bit ago (perfectly timed about a week before Earth Day) the Baltimore Speaker Series had their final speaker of the season: Bill Nye. To me, he'll always be known as "Bill Nye, The Science Guy" (because I'm in that age group that knew him as such.) It was a sweet li'l moment of nirvana to be in the Meyerhoff Symphony Hall, basking in the presence of his wit, humor, and intelligence, talking about science and our planet during Earth Day season!

Being foremost a scientist as well as an engineer, an author, speaker, inventor, he knows a lot about a lot. Clearly he believes in science and wants us all to know that it's important. The whole evening, and now as I reflect back, I'm struck by this quote that hangs in my office which is from Neil Degrasse Tyson [who is a good friend of Bill Nye's, by the way]: 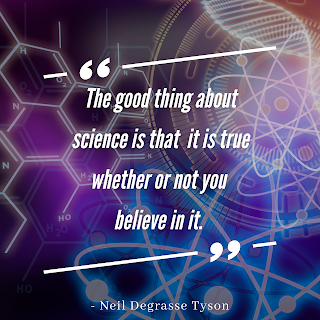 I love Bill Nye's approach to everything. He makes you think. He makes you laugh. He makes you think some more. It seems a lot more of us in the world need to adopt that approach! A big part of his conversation was that the denial of climate change is NOT going to change anything. The science is real. 2010 to 2020 was the hottest decade on record. There is science in ice core samples, tree rings, fossils, shrinking glaciers in Greenland, and more that backs up the fact that rising historic temperatures all point to human impact.

Bill Nye made reference to the Earthrise picture of the planet (taken by Bill Anders from space December 24, 1968). This reminded me of my recent Amanda Gorman post. Their messages of both were the same. We have a shared reality here on planet Earth. No political boundaries. One place. One people.He also made reference to the 2022 Oscars Night/Will Smith slap that was heard around the world. Of course by now, that news has died down a bit, but media in the instant aftermath was highly abuzz about it. Bill Nye said if we all were talking about climate change in the same way and to the same extent that everyone was talking about Hollywood news, we'd be "getting it done." His messages: 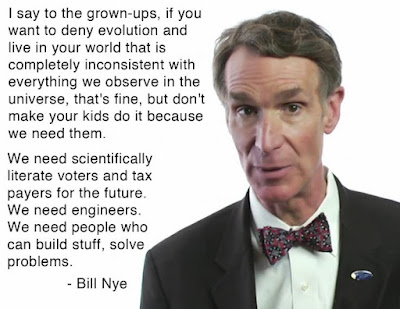 His third message, which I found a mirror to what I always say, is that it's going to take big ideas and innovation to solve the climate crisis, which he deemed one of the greatest problems we are facing. Because we all share this world--we all share the air--everything we do affects everyone else. We can't say "fire" in a movie theater without consequences. We all need to work together to figure "it" all out. No one is coming to save us --it's up to us to figure this out.

Bill Nye also commented about Article 1, Section 8 of the U.S Constitution and how one of Congress' roles is to "promote the Progress of Science and useful Arts, by securing for limited Times to Authors and Inventors the exclusive Right to their respective Writings and Discoveries." Useful arts is engineering and innovation. He stressed that it is in the Constitution to go forward with our big ideas and be problems solvers using innovation! It is our job to "create the future we want." Not surprisingly, this is the motto and mission of The Solutions Project, where Bill Nye is one of the 40 funders. Their goals?

Bill Nye left that evening with an inspirational call for action--to go forth and change the world. It's going to take us, people! Let's do this! 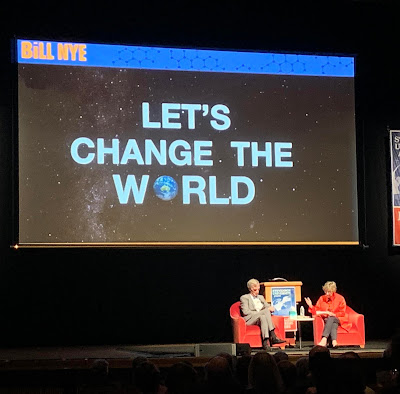