Books are sacred to me. They are magic in your hands, taking you places, becoming gateways of inspiration, enjoyment, insight, and knowledge. Picture books have the added bonus of delighting your senses with the illustrations. Plus they act as colorful invitations, opening up new worlds and perhaps even future passions. 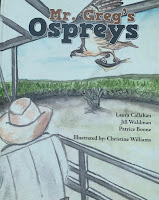 That is the hope of "Mr. Greg's Ospreys," a picture book written by Laura Callahan, Jill Waldman, and Patrice Boone and illustrated by Christine Willliams. All four Maryland residents, they created the book to not only to share Mr. Greg's story and the importance of the work he does, but with the hopes to inspire future generations to become conservationists and environmental stewards. The book outlines a year in the life of Mr. Greg, from July to the following August, as he tends to the ospreys along the river. Throughout the book you learn a lot about the life of ospreys as well as the many things Mr. Greg does to keep the ospreys safe in their natural habitat. 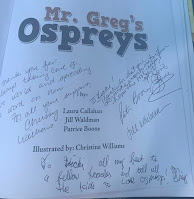 Being related two 2 of the 4 collaborators of the book, I scored an invitation to their outdoor book signing at Patuxent River Park last weekend. (Numbers were limited due to Covid restrictions at the time the event was organized.)
There, we got to celebrate in their successful launch of the book AND meet Mr. Greg. 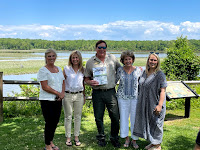 Mr. Greg is both a character in the book AND a real person. Mr. Greg is Greg Kearns, a Park Naturalist and master bird bander for nearly 4 decades who has been overseeing the osprey nesting site program he started in 1984 on the Patuxent River at the Jug Bay Natural Area. He spoke at the signing of his longevity in the area and how osprey numbers in the 1970s and early '80s were quite low. He referenced ornithologist Roger Tory Peterson (known for his 1934 "Guide to the Birds," the first of many field guides he'd later come to write), mentioning birds as an environmental litmus test of the health of an area. 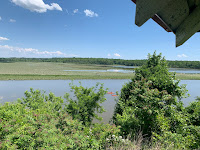 Several decades ago, the low number of ospreys indicated that Jug Bay--the largest freshwater tidal area in Maryland--wasn't doing exceptionally well. Just like eagles, osprey populations were severely impacted by DDT which thinned the eggshells of these birds. Yet now, with the help of osprey platform towers along the Patuxent River to help them find a place to build their nests, the osprey population has grown and been restored because of humanity and the help of these man-made platforms. Mr. Greg estimated that 400 osprey pairs are now thriving along the 115 mile river.
As if on cue while Mr. Greg was telling us all of this, we all got to see the swooping chase take place over the river backdrop of an osprey chasing an adult eagle. This was only one of the many ospreys who decided to make an appearance at the book signing. It's as if the ospreys knew we were talking about them. 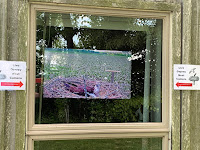 One could argue that Patuxent River Park is a secondary main character in the book to Mr. Greg. It is here in these wetlands that the real life story of Mr. Greg and the ospreys takes place. In addition to having an observation tower and multiple places to hike and picnic, there is an area in the park called the Rural Life Museum with several historical out-buildings and guides present to share the past. Additionally there are campgrounds and canoe rentals. Perhaps a favorite, though, is their very impressive Osprey Cam (which you can view here) which Mr. Greg also maintains. 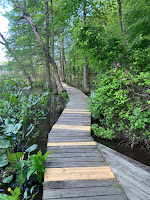 Prior to writing their book, Laura, Patrice, Jill, and Christine accompanied Mr. Greg on a osprey banding boat trip down the Patuxent River. While bird banding, Greg places identification bands on the hundreds of osprey chicks that hatch in the spring in order to track the chicks when they migrate and return. While on this boat trip, the ladies took photos and learned of the many duties Greg has managing the osprey sanctuary. From there, the 4 of them put these stories on paper and over time, Mr. Greg's Ospreys was born.
And who knows, after reading their work about Mr. Greg's work, maybe future conservationists will be inspired to do what they can to take care of nature!

Roger Tory Peterson Quote from https://www.azquotes.com/quote/565737; all other pictures taken at the book signing on May 15, 2021.