'Tis the season for wintery wonderlands here in the week between Christmas & New Years, and snowy beauty was calling my name--perhaps because we don't have a lot of snow to show for it right here and now. Maybe soon. Fingers crossed for January. 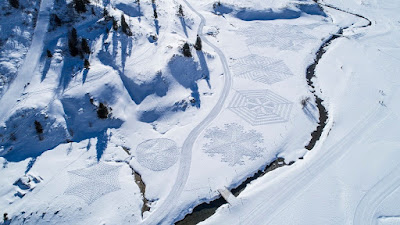 Simon Beck's Snow Drawings can give you a flavor and feel for snow. He takes a total hands-on approach. Or rather, a feet-on approach. No machinery to make it happen--only rope, an anchor, snow shoes, a ski stick, some markers to organize the space, and probably a good winter coat. Pretty impressive when these snow drawings are the size of soccer fields when finished.. Also, it's no surprise that he's a former engineer with a background in cartography (mapmaking). I think you'd have to be in order to think of something on that grand of a scale and to have the vision of how to do it with such a precision-level outcome. 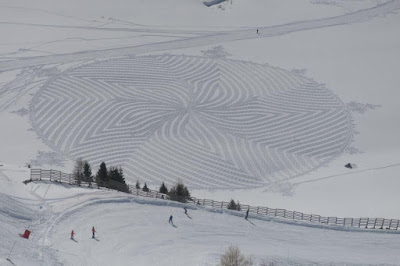 I'd imagine that it'd be such a meditative moment, going out in the snowy, quiet world. The wintery wonderland actually is as quiet as it seems because the snow, which is porous due to the open spaces in the individual 6-sided, crystalized snowflakes. It's this porous-ness which absorbs the sound & surrounding sound waves. The world in this setting is literally blanketed in snowy silence. And there is Simon Beck, systematically moving about, mindfully creating his snow art. Some of his greater works of art can take up to 12 hours of outdoor trekking.

Perhaps this could serve as inspiration for all of us to up our snowman or snow angel game! I'd imagine the step count would be pretty phenomenal on my Fitbit to create something like this! What a creative way to stay in shape in the winter! 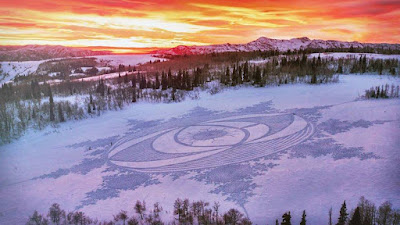 To learn more about Simon Beck and see more of his his dynamic designs and snowy installations, check out the following: