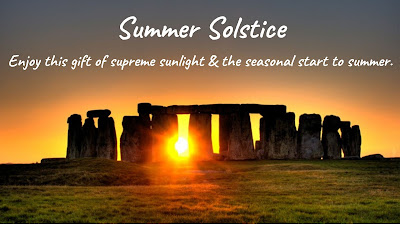 Symbolically fitting, June 20, 2020 marks this year's Summer Solstice, the "longest day" of the year (in that it is the day of the most hours of sunlight). It also is the official seasonal start to summer, despite the warming temperatures many people find in May and early June.

Traditionally summer solstice has many ties with Stonehenge in England, due to its layout and how it has been found to align with the sunrise on both summer and winter solstice. Dating back to it's start 5000 years ago and it's completion in 2500 BC, Stonehenge has been known as a mystically sacred and spiritual place. Its history has ties to the Druids, Celtic beliefs, and Danish kings, and it serves as transcendental spot for both New Age and earth-centric religions as well. Annual events are common for summer solstice, where people flock to experience the twice annual event of the sun aligning through the rocks, and which reverse their position for winter solstice.

With the restrictions on gathering places, this year the English Heritage organization (the managing entity of Stonehenge) is not opening for the sunrise celebration and is asking people to not visit. But fear not, as a grander opportunity for all of us awaits, making it not necessary to travel to this historic location. Instead, the sunrise will be live streamed on English Heritage's Facebook page and their other social media accounts the morning of June 20th, making it possible for anyone world wide to witness this experience. Mark your calendar!


To learn more, check out these sites:

Image from http://www.architen.com/2014/06/summer-solstice-time-celebrate-time-grab-sunnies/ by Christopher Roberts with words overlayed by me in Canva.com, video from https://www.travelandleisure.com/travel-news/stonehenge-summer-solstice-livestream