Robot-Roving Through The Computer History Museum 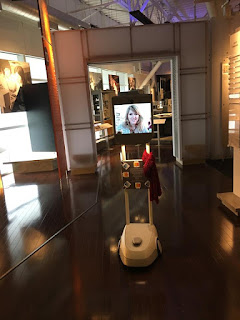 It's not often that we, as adults, get new experiences that daze, amaze, and dazzle us. Additionally, if you're like me, and embrace your inner geekiness as part of your effervescent charm, you tend to look for some fun and funky tech experiences that will get you here. And I did.

At the start of 2019 we go the opportunity to go to California--without ever leaving my time zone, Maryland, or my school! We were in my Maryland classroom & Mountain View California's Computer History Museum simultaneously via the Beam Telepresence Robot. It was a crazy feeling of déjà vu as I got the opportunity to revisit a place I had visited this summer! To have my robot footprints in the same place my actual feet had once stood!

I actually got to drive the Beam 3 different times this year--one, a trial run (to make sure our systems would work), and the other two as virtual field trips with my 2nd and 3rd grader. They got almost as much of a kick out of my robot driving as I did! 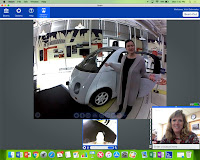 Prior to robot-driving, we did some diving into the Computer History website in class--in particular, their "Revolution: 2000 Years of Computing" exhibit. We explored the website to learn online about their 1,100+ computer history artifacts--everything from the abacus, early calculators, punch cards, to modern day! We also visited the online "Where To?" exhibit about self-driving cars. While investigating the website's online images, videos, and artifacts, students took notes on paper of items they're interested in, fun facts they learn online, and any questions along the way. 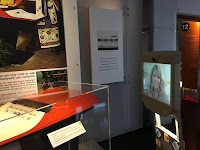 Then, the exciting part--the trip to California via computer! Nothing like being on a guided tour, learning about technology WITH technology! My kids were bummed they didn't get to have the experience of driving the robot... but, if you let one drive, you have to let all 30+ drive! I got to have that glory all to myself! 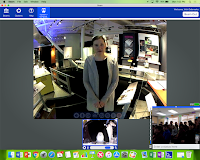 Among other things, on our tour we got a chance to see a prototype for the first home computer from 1969 (for your kitchen for researching recipes--wayyy too expensive and it never came to be). We also got to see the office computer from 1973 (4 years later) with a screen that was paper sized and even a mouse! We also saw the 1999 Google Server, the teapot that inspired 3D drawings on computers, and everyone's favorite: the self-driving car. I was proud that I didn't take out anyone's toes or run into any door frames while  driving the Beam Telepresence Robot around the museum.

To see more in action, visit this article from our school archives (including a video) of our experience. 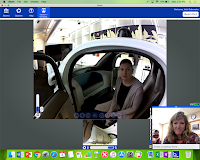 If this looks like your kind of driving experience, book a tour by checking out the Computer History Museum's Tour information. Given the timing, they only offer trips at 10 am on Mondays (in their time zone), while the museum is still closed to the public. I was very glad for that, as it was tricky enough to drive around the robot!

Lastly, here are creative curiosities and questions my 7-9 year olds posed after visiting the online exhibit (prior to our virtual visit). While the list was long and we didn't get all the answers to these during our one-hour tour, we did get a great opportunity to interact with our docent and see some pretty remarkable artifacts. Not to mention, it really made history come alive! 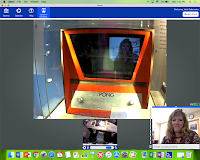 -What's the oldest thing you have in the museum?
-How can they have over 1000 computer "things"
[=artifacts] in a museum?
-How did they figure out how technology works?
-How big was the first computer?
-How many computers have there been?
-Who invented the first computer?
-How do you make a computer?
-How do you make computers?
-How long has the museum been open?
-Do they have olden day virtual reality goggles there?
-I wonder about the differences between then and now computers.
-Will we get to see old phones and old headphones?
-Who had the idea of a computer and how did they get it? 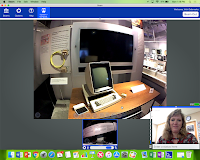 -Why is technology important?
-Who created the Internet?
-How long has technology been a thing?
-How is a punch card a part of computer history?
-How do pocket calculators work?
-What were the earliest computer games?
-How are computer games on TV's?
-Why was the web invented last?
-Are they trying to make flying computers?
-How many video games have there ever been?
-Do they have museums like this all around the world?

-Why are mini computers called that when they are big? (They were smaller than the mainframes, but clearly
bigger than personal computers!) 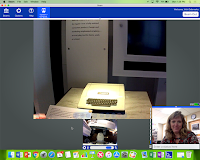 
Images from either our side or the CA side of our Virtual Field trip, screenshots included!
Posted by Vicki at 1:00 AM