Tackling Ocean Conservation, One Comic Strip at a Time

I was a product of the 80s, which means I was a child in the 70s. The shark soundtrack of “Jaws” still brings me back to that 1975 movie, raising the hairs on my skin to prickle level. It made for 7 years of adult living in Tampa and Clearwater (or trips to Ocean City, Maryland or any Caribbean vacation) ones where I was scanning the shoreline on beach days, looking for dorsal fins, and hearing that “Jaws” music in my mind.

I’ve never seen one.
But the music continues in my mind in certain circumstances. 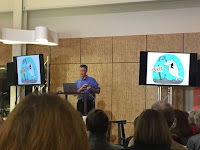 I had a degree of that music serenading me on my drive to the Smithsonian Environmental Research Center (SERC) in Edgewater, MD. The reason for my Tuesday night trek… I was off to see Jim Toomey, cartoonist, conservationalist, and creator of Sherman the Shark (from his “Sherman’s Lagoon”) speak at SERC. This struck a particular thrill in me as I’ve written about Toomey before.

During his humor-filled evening of frank conversation on cartooning and caring for our planet, he shared with us some of the regulars that are a part of “Sherman’s Lagoon,” the cartoon strip he’s been writing since 1997:

While “Sherman’s Lagoon” takes place in the ocean, Sherman does travel to other habits, and has been to the Chesapeake bay a few times. Here in the Chesapeake Bay area, the big issues tend to be “agricultural runoff, loss of coastal habitat, and invasive species.” 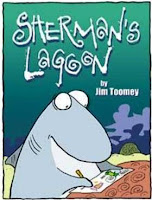 Some of the more global marine issues he mentioned he’s tackled in his 20-year stint of comic strip writing with a message include:

--More mindful choices when it comes to menu items (addressing demand and the ultimate oceanic cost);
--Shark-finning (one of his more heavy and difficult topics to cover);
--Ocean acidification of coral;
--Animal tagging;
--Climate change;
--Tracking a plastic bottle to the Great Pacific Garbage Patch.

Toomey mentioned he felt we were in a “sweet spot in time.” With that comes optimism. He feels that there is a meeting of the technology, the data and the ability to go forward to teach and take action. Additionally, scientific facts stay measurable and hard to argue against. He sees us now as the first generation (especially with rate of technological change) who will be able to go forward now and into the next decade from now to be able to gather and make sense of all sorts of scientific data. With the media as it is—meaning we ARE the media during these social media days--we all are more able to talk to the power than in the past. That means we can share the message, and do something about it. This role of citizen scientists (and activists) aligns itself very closely to SERC’s main mission. 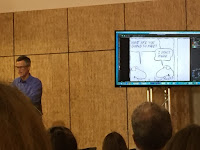 While he purposely mentioned he was not going to get political (because all roads these days do seem to end up there), he feels that we need to help people see that the vision of environmentalism is not just “old hippies.” We need to take note of our former environmental (and Republican) president Teddy Roosevelt is the one who began our National Park Service. It’s the poets and the painters out there who have always held an appreciation of nature. To really have your #eco message heard in this noisy world these days, you need to make it so that everyone has a stake. It shouldn’t be a “Left thing” or a “Right thing,” but something we all bring to the center, highlighting the importance to ourselves, our children, and our future. “Environentalism is really all about preserving things for future generations. It’s about sustainability, it’s about the precautionary principle, sustainable business—these are values I think both the left and the right can embrace.”

Getting everyone to the center can be a tricky thing to do, but that’s where Toomey is in the “sweet spot…” as humor has an amazing way of doing just that!

To see Jim Toomey in action… 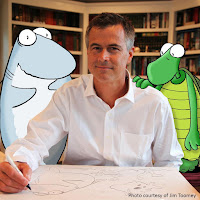 Find his comics in books & newspapers
Quoted remarks either mentioned directly by Jim Toomey or from the informational sheet written by Kristen Minogue, given out that night at SERC: Tuesday, October, 17, 2017. Cartoon from the same informational sheet.  Photographs from my night at SERC. Jaws Movie Poster https://en.wikipedia.org/wiki/File:JAWS_Movie_poster.jpg.  "Sherman Lagoon" pic from http://www.sharkdefenders.com/2011/04/shark-cartoonist-jim-toomey-joins.html. Jim Toomey pic with cartoon characters from https://serc.si.edu/event/keynote-lecture-drawing-inspiration-sea
Posted by Vicki at 7:53 PM