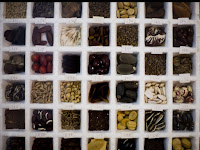 I first learned of Doomsday vaults a few years ago and had it in my list of things to write about one day here on GTG. At the time I first heard of it, I felt like I was living under a rock. Who knew this was "a thing." It sounded more like some subplot of the latest Zombie Apocolypse movie.
But it and seed banks came up again when I was watching Zac Efron's Netflix series Down to Earth. In Episode 5, set in Lima, Peru, Zac and Darin Olien visited the International Potato Center where they have collected the largest number of potato strains in the world. Not just because they are crazy potato-lovin' people, but in order to collect and preserve the genetic informations of potatoes for biodiversity purposes if there's ever a great potato famine that endangers or causes strains of potatoes to become extinct. 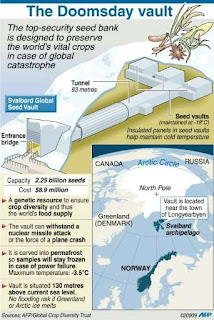 In watching the show, I learned that there actually are a lot of doomsday vaults all over the world. Not just the biggie created in 2008: the Svalbard Global Seed Vault in Norway... and the Peruvian International Potato Center (founded in 1971). About 11 minutes into this episode of Down to Earth there is a great map posted showing some of many of the different vaults and seed banks that are protecting plant life in case of an all encompassing wipe out or "super disaster. The map showed these vaults (however there are over 1,700 in the world):
It kind of leaves you wondering why on Earth we need a place on earth that has all of this. However genetic back up is essential in case something does happen where the these "back ups" are necessary. That could include a myriad of events such as war, natural disasters, fires, global temperature change. As they mentioned it in the Down to Earth episode, it's like having photos backed up in the cloud. At all of these centers, not only is the safety and security of what we do have important, it is also a place where vital research is happening now in order to get the genetic code of our existing variations. Likewise, they are also important centers to help create strains that are more resilient--especially in the event of global temperature rising a few degrees...which we do seem to be on record for doing so.
All this agro-biodiversity brainstorming comes from the Food and Agricultural Organization of the United Nations where they have an International Plant Treaty on Plant Genetic Resources for Food and Agriculture. Again, who knew? The purpose is to save and conserve what plant resources we do have on the planet and to share the seeds to ensure food security around the world.  Its one of the many ways through the United Nations that we can collaborate with the many countries of the world for the common good of our planet,

Seed Vaults are just one of the many ways we preserve plant genetics. This graphic shows all the ways in which we do: 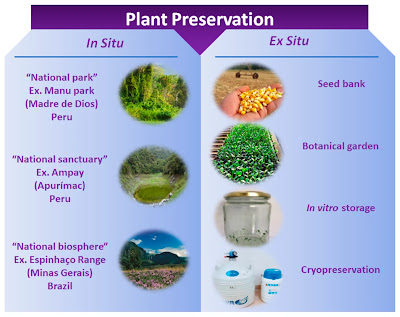 In situ means they are conserved in their natural habitats. These tend to be those conservation places that come to mind.
The other sites (the ex situ) are for the "just in case" situations. They're the equivalent of cloud computing back up and all I've been talking about here. Botanical gardens are similar to field collections where they are designed to recreate the natural habitats. Seed banks or vaults tend to use a combination of the in vitro storage and cryopreservation, where they are frozen in time and cold temperatures. Great detail can be found about each of these terms here.

To learn more about these high security plant preservation systems, check out the following:
Doomsday Vault infographic from https://phys.org/news/2017-05-norway-boost-climate-defences-doomsday.html
Plant preservation photo: https://www.mdpi.com/1422-0067/22/11/6157/htm; Videos from  https://www.youtube.com/watch?v=XYcpX9U6BxY&t=236s and  https://youtu.be/pwGcrSuAIuc; image from https://education.nationalgeographic.org/resource/saving-seeds
Posted by Vicki at 12:30 AM