Climate Change Can Be Scary

Last weekend we had some remarkable weather for December in the DC-Baltimore area. Upper 60s & even 70 degrees on Sunday, Dec. 13th. Given the delightful temperature, we had a park playdate set up my son with several of his pals from his old school.  It was a fun day all around.

Despite that though, perspectives changed at bedtime--at least for one 10-year old full-hearted, angst-ridden, tender-hearted/tender-souled boy.  My son began repeating the morning mantra of his, and he was terribly troubled at bedtime. In his mind, Sunday was "the worst day ever." Why? BECAUSE of that unseasonably warm 70-degrees temperature.... all of which he knew was the result of the big bad guy:  Climate Change.

He nearly couldn't go to bed due to his own consternation on the weather, the climate-implications, the "wrongness" of 70 degree weather for mid-December.  I couldn't talk him off the ledge until I did two things:


1.  I showed him the 15 day forecast on The Weather Channel to show him that the temperature wasn't on the daily rise, heading for planetary implosion.  The forecasted temperature drops predicted for the next two weeks went miles for easing his angst.

2. We went online and looked into information about the Paris Climate Cop21 Talks on Climate Change that took place the week prior. When we spoke of that and the fact that world leaders were working to make a difference and change legislation, he settled. 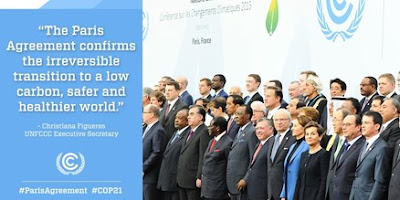 The world sure can be difficult for a 10-year old.

Yes, he's the kid of an "EcoWarrior" who has invited him to watch Bill Nye and other climate-outspoken-peeps. But still... he seriously was losing sleep on it. Literally and completely.

These are the things that worry a mom.

It led me to the conclusion that despite your leanings, we need to do something. The projection is worrisome.  Even if you are still on the climate change conceptual fence about whether or not to buy in or deny it. Worse case scenario: we work to do good on this planet of ours, and we work to eliminate pollution/problems/such... If we do all of that, no question: we are ahead. That is not partisan. That is leaving the world a better place than we found it. THAT is what we ALL should focus on.

Click here to visit the outcomes of the COP21 talks in Paris on
December 12th, 2015 between 195 nations.

Here, you can find President Obama's full speech at COP21.

And here are two videos that show yes, climate change can be scary
(to grown ups too), which is why it's important to make that
2 degree Celsius difference they are talking about with COP21.